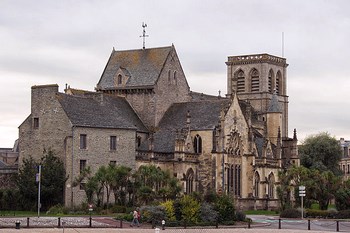 The port city of Cherbourg is NorVest in France the English Channel – in the region Basse-Normandie.Cherbourg was in 2000 merged with the neighbouring municipality Octville, and has therefore been given the official name of Cherbourg-Octville. The city has about 40,000 inhabitants (2009).

Cherbourg has a number of popular tourist attractions – including Basilica “St. Trinity” from the 1400s and the statue of Napoleon 1 from 1858. Also “Le Théâtre à l’italienne” from 1882 is a landmark in the city. This is one of the last Italian theaters that were built in France.

Art-lovers should head to the city’s art museum “Le Musée des Beaux-Arts Thomas Henry”. The museum was inaugurated in 1836 and has exhibited ca. 300 paintings and sculptures from the 1400s until the 1900s.

“Le Pont du Jour” must also be mentioned. This is a relatively new art center in Cherbourg, which has great photography exhibitions.

An attraction for the whole family in Cherbourg, the theme park “La cité de la Mer”. Here visitors can see such giant aquariums with over 1000 tropical fish.

A visit to Cherbourg, one should also take a trip to the castle “Le Château des Raval” from 1575, which is open to the public. The castle is surrounded by a beautiful park.

From the port of Cherbourg ferries to both England and Ireland.