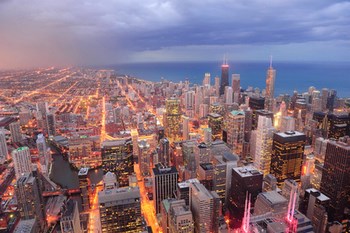 Chicago is located in the northeast U.S. by Lake Michigan, and belongs to the state of Illinois.The city has 2.7 million inhabitants, while the metropolitan area has a population of 8.7 million. Chicago, making it the 3rd largest city in the United States.

Chicago has a humid continental climate, and is often called the “windy city” because of its changing weather conditions.

Chicago is an important trade and port, a rail hub, America’s second largest financial and business district. Chicago also has several universities – where the oldest founded in 1890.

The cityscape is dominated by high-rise buildings and skyscrapers and the tallest building is the Sears Towers – which measures 443 m It is popular for tourists to visit the observation deck of this building at the top, and thereby get a breathtaking view of the city and region.

Chicago is famous for its architecture, its cultural life and its many museums, theaters and opera. There are many music venues in Chicago, best known for jazz, blues and classical music. The town has a famous symphony orchestra – founded in 1891.

A major tourist attraction in the city’s art gallery “Art Institute of Chicago” – with a huge collection of such French art from 1800 – and 1900’s.

The city is otherwise a natural history museum, an astronomical museum, planetarium, historical museum, aquarium and zoo. The ethnic neighborhoods “China Town”, “Greek Town” and “Little Italy” is also worth a visit.