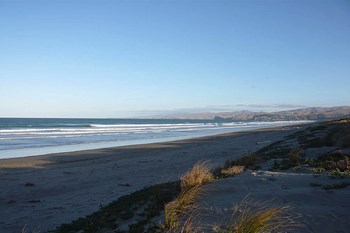 Christchurch lies on the east coast of the South Island of New Zealand in the Pacific, and belongs to the region of Canterbury. The city has 390,000 inhabitants (2010), and is the administrative center for the region. Christchurch is New Zealand’s second largest city.

The city is famous for its British architecture and ambiance, and is also known for its many parks and well-maintained private gardens. For that reason, called Christ Church often for “garden city”.

In downtown Cathedral Square “Catherdral Square” – where the Christ Church Cathedral from 1864’s. Cathedral was subjected to earthquake in 2011 and was badly damaged.

Other tourist attractions in Christchurch include Air Force Museum – with its extensive exhibition of military aviation New Zealand and Canterbury Museum – with its exhibits where visitors can learn more about the discovery of the Antarctic colonization and Maori culture.

The city has otherwise a beautiful botanical garden, several art galleries and a popular science museum.