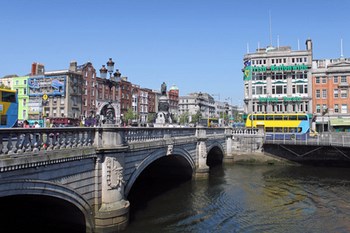 Dublin – capital of Ireland – Lies where the River Liffey flows into the Irish Sea.The city has approx. 500,000 inhabitants (2010). Taking the suburbs, the population is increasing at twice (Greater Dublin). Dublin is the Republic of Ireland’s political, economic and cultural center. It is also a major port with shipbuilding and export business. Among the main commodities exported from Dublin port, beer, whiskey, meat and leather. Dublin is Ireland’s largest industrial city, and is particularly known for its large breweries (Guinness) and his whiskey production.

A few kilometers outside the Dublin is also a major ferry port which serves passenger traffic to the UK.

Dublin was founded by Norwegian Vikings in the mid 800’s. Kingdom of Dublin was, however, defeated by the Irish in 1014, but the Vikings came back and was not finally defeated by the English in 1171.

Among the attractions of Dublin there is a lot of historic buildings. The most famous is from the 1700s – and includes such Christ Church Cathedral (Protestant), which was built by the “Norwegian” king Sigtrygg around the year 1030. Other important churches are the cathedral of St. Patrick anglkanske from the 1200s, where the famous poet Jonathan Swift is buried. Also, the Roman Catholic St. Mary’s Cathedral in 1825 recommended a visit.

Other famous structures include Dublin Castle (built in the period 1200’s – 1500’s) and Parliament Leinster House from 1745. Also, Bank of Ireland (built 1729) and the presidential palace in the great and beautiful Phoenix Park is one of Dublin’s magnificent buildings. The Phoenix Park is the rest of a popular zoo.

In 2003, Dublin a new landmark as the 120-meter high sculpture The Dublin Spire was set up in the central main street O’Connell Street. Otherwise, it’s pretty Square Merrion Square, which was filed in 1762, a place most tourists seek.

The nearest airport is Dublin Airport, located 10 km north of the city.