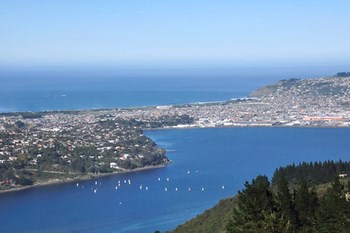 Dunedin is located on the southeast coast of the South Island in the Pacific in New Zealand, and has 120,000 inhabitants (2011).The city is located in the Otago region – the inner harbor “Otago Harbour”, and has an outer 10 km further north.

Dunedin was founded by Scots in 1848, and named after the Gaelic name of Edinburgh (“Duneideann”).The city’s university was founded in 1869 and is the oldest.

Dunedin has an active cultural life with many art galleries, museums and theaters. The city is also known for its ecotourism – where albatross, seal and penguin colonies are popular tourist attractions.

Other attractions include Dunedin brewery Speights – founded in 1876, Chocolate Factory “Cadbury World”, “Baldwin Street” – which according to the Guinness Book of Records, is the steepest street in the world, Otago Museum – with exhibits, culture, geology and natural history, Otago Settlers Museum – regional historical museum, Larnach Castle from 1871, St. Paul’s Cathedral in 1919 and the Roman Catholic St. Joseph’s Cathedral in the Gothic style from 1886.

The city also has a botanical garden and a Chinese.