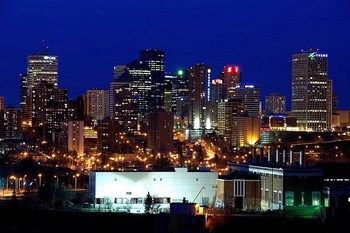 Edmonton is the capital of the Canadian province of Alberta. Home to 812,201 people in Edmonton (2011). It is the second largest city in the province after Calgary.

Edmonton is a major economic center in Canada, and has significant oil and gas industry. It is also an important seat of the technology industry. Shopping opportunities are good at West Edmonton Mall, the largest shopping mall in North America and one of the largest in the world. The city’s nightlife with bars, restaurants and pubs are concentrated in an area called Whyte Avenue consisting of some busy streets.

Edmonton offers a variety of museums of different size and type. The largest is the Royal Alberta Museum, which has about ten million objects in its collection. TELUS World of Science is a museum and research complex that features five galleries for temporary exhibits, an IMAX theatre, a planetarium and observatory.  Art Gallery of Alberta, formerly the Edmonton Art Gallery, the largest gallery in the city with a collection of over five thousand works of art.

There are two airports in Edmonton, Edmonton City Centre (Blatchford Field) Airport and Edmonton International Airport. The latter of which is located 26 km southwest of Edmonton is the largest and one of the best airports in Canada.