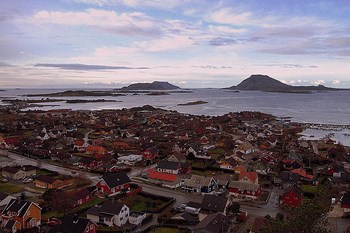 Floro is a city in Flora, Sunnfjord in the county county. Floro is located at the tip of the island of Flor land between Botnafjorden and Solheim fjords, and is Norway westerly town.It has 8642 (2012) inhabitants.

Floro was originally created in 1860 because of the well herring fishing in these waters, and establishments of the city were determined from the highest level of Parliament. Floro first gained status as a seaport, it is a city with limited rights. Because Floro was planned as a city and not built up gradually so that many Norwegian towns, street network is designed as a city. Beach Road is a busy and enjoyable shopping street and after refurbishment in recent years it has been cobbled.   The municipality is repeatedly voted the nicest Township in the country and was awarded “Sustainable Cities award” in 1998.

Businesses in the community are export-oriented, the main industries are fishing industries of both fishing and farming, shipbuilding and service industry. Floro is also an important supply base for the oil industry and has a well-developed port. Floro is one of the ports of call for Hurtigruten.

Coastal Museum in the county is located in Floro. The museum not only to past natural and cultural conditions along the coast, but also contemporary culture.

Floro Airport is 2 km northeast of the city.