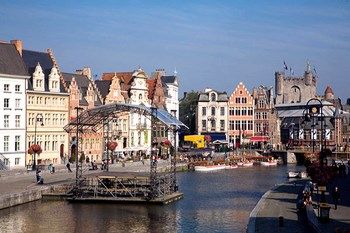 Gent located in northwest Belgium, is the capital of the province of East Flanders. The city has about 243,000 inhabitants (2010), situated at the confluence of the Rivers Scheldt and Rental. Despite Gent is an inland, the connection to the North Sea through Gent Terneuzenkanalen. The port of Ghent – located north of the city – is the 3rd largest in Belgium.

Gent is a beautiful city with its intact medieval architecture and townscape is characterized by numerous canals, narrow streets and historic buildings. In addition, the city has a number of museums, art galleries, theaters and opera houses.

Some of the most popular tourist attractions in Ghent include the gothic Sint Baafs Cathedral from the 1500s, Nikolaus church with Romanesque portal from the 1200s and Belfort tower from the 1300s.

The city is also known for its many festivals that are popular for both tourists and locals. One of them is the large flower festival “Gentse Flora Lien” which is held every 5 years. Next time this is held in 2015.