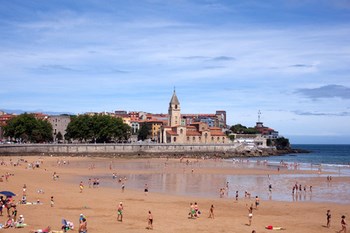 Gijon is a coastal city located in northwest Spain Bay of Biscay, and is the largest city in the province of Asturias.Gijón has approximately 280,000 inhabitants (2011), and is an important center for culture, commerce and finance.

Gijón is known for its Roman history and its architectural heritage, and is often referred to as a “green city”. The port “El Musel” in Gijón is one of the largest in Spain, and from there a ferry connection to such Nantes France.There are also a number of cruise ships that dock here.

The city has a humid and mild maritime climate – hot summers and cool, rainy winters.

During the summer, many tourists come to Gijon to bathe, and the city has many beautiful sandy beaches. The most famous is the San Lorenzo Beach.

Some of the city’s best known tourist attractions include old town and district Cimadevilla – with its magnificent sculpture park “Elogio del Horizonte” castle “Palacio de los Valdes’ from 1590 – which today houses a historical museum, city hall from the 1800s as well as the archaeological nature park” Campo Torres “.

Gijón has also a popular aquarium, a botanical garden, casino, railroad museum and an ethnographic museum.

Activities in the city must first and foremost sailing, diving and boat trips mentioned. Gijón also arranges an annual festival, which is popular for both locals and tourists.