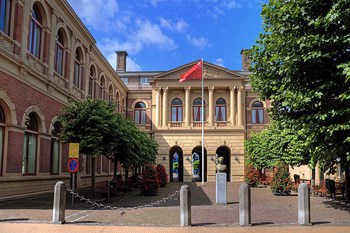 Groningen is located north of the Netherlands at the confluence of the rivers Aa and Hunza, and has approximately 190,000 inhabitants (2011). The city is the capital of the province of Groningen.

Groningen is an important commercial and cultural center for the region, and has its own university – which was founded in 1614. Cultural life in the city is varied with art galleries and museums as well as several theater and music scenes.

The old town of Groningen is surrounded by canals, and the square “Grand Place” are many cosy cafes, restaurants and bars. This is also the town hall from 1810 and the Gothic church Martini kerk from the 1400s – with its 97 meter high tower.

The city’s main museum is “Groninger Museum” – which has exciting exhibitions. The museum is built on an artificial island in one of the canals. This was formerly a local history museum, which later evolved to become one of the most innovative museums in Netherlands.

Groninger is otherwise a cartoon museum, a Museum, a maritime museum and a university museum. In addition, the city has many public sculptures and several parks and green spaces.