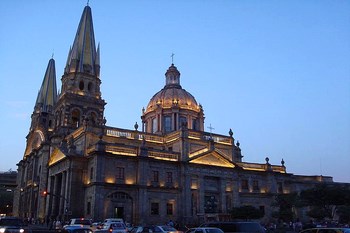 The city was heavily damaged during the Spanish Civil War (1936 – 1939), but still has some well preserved buildings. One of these is “Palacio del Infantado” (“Prince’s Palace”) from the 1400s, which was built for the Dukes of Mendoza. The palace is a major tourist attraction and also a very beautiful facade.

Other attractions in the city include Church of Santa Maria from the 1300s – with its minaretlignende tower, the church “San Ginés” from the 1500s, several parks and green spaces – including the city park “Concordia” and the old bridge over the river Henares – which was originally built in the 900s.

An attraction for all the family in town zoo “El Zoologico Municipal de Guadalajara”.

Approximately 74 km northeast of Guadalajara – Siguenza – is the museum “Museo De Arte Antiguo Diocesando” which also recommended a visit. Here visitors can see exhibits of religious art from the 12th to the 20th century.