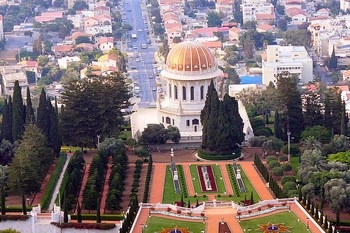 Haifa is one of Israel’s most important seaports, and is north of the country on the Mediterranean Sea. The city has about 270,000 inhabitants (2010), while the metropolitan area has a population of nearly 1 million.

Haifa’s population is representative of the five religions – Jews, Muslims, Christians, Druze and Baha’i. There is still a widespread tolerance between the different religious communities here.

The city is located on the south side of Haifa Bay – at the foot of Mount Carmel (which is 546 meters high). The mountain has lush vegetation, and has been declared a National Park. At Mount Carmel is also Báb sanctuary – which is a UNESCO World Heritage Site. There is also the French-Catholic convent “Stella Maris” from the 1200s.

Haifa has also many important museums – including an immigration and maritime museum, a science museum, an art museum and “Tikotin Museum of Japanese Art” – which is a great museum with exhibits of Japanese art.

The city also has a zoological and botanical gardens and beautiful miles of sandy beaches slightly southwest of the center.