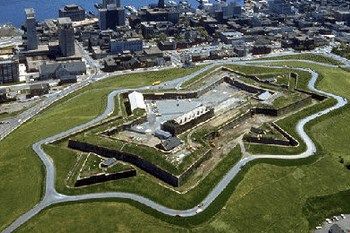 Halifax is a city in Canada, located on the east coast of the Atlantic Ocean, and is the capital of the province of Nova Scotia. Halifax has approximately 340,000 inhabitants (2007), and is an important port city.

The city was founded in 1749 and has a number of historic tourist attractions. Halifax is also known for its great shopping in stores and malls, and its lively nightlife with restaurants, pubs and live music.

The main attraction in town is the star-shaped fort “Fort George” in the hill fortress Citadel Hill. Here you can find the old bell tower in 1803.

Other tourist attractions include Halifax Pier 21 is Canada’s Immigration Museum, City Hall, built in 1890, the beautiful park “Halifax Public Garden” – which was founded in 1867, St. Mary’s Basilica in white granite from 1899, which is a great Catholic Cathedral.

It may also be noted that most fatalities from the ship “Titanic” was buried in Halifax in 1912 at the cemetery “Fairview Cemetery”.