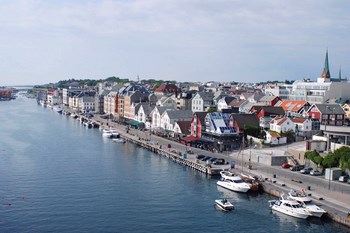 Haugesund is a city and a small municipality in Rogaland. The city has 44 524 (2012) inhabitants, and also the islands Hasseløy and Risøy and parts of it Norheim Karmøy belong to the city.

Haugesund has a grid of streets dating from the time when the city was founded in 1854.The center has a well-preserved wooden buildings, quaint streets and turf. The city has many nightclubs and great restaurants that offer both traditional sea and seafood and international cuisine. Haugesund is famous for two festivals. One is the festival which each year awards the prestigious Amanda Price. The other is Sildajazzen held in mid august.

The city was at one time the third largest merchant fleet in Norway, and there were many major companies here that left their mark on the city. The city’s distinctive pink town hall from 1931 was a gift from the ship owner Knut Knutsen OAS and his wife Elisabeth.

Fishing and shipping is still an important economic engine for Haugesund. The place was already mentioned in Harald Fairhair’s saga, but first became significant in the 1700s as a fishing port. A major attraction in Haugesund Harald Haugen, erected in 1872 in memory of Harald Fairhair gathered Norway in 872 Harald should have been buried here.

Haugesund Airport is located at Karmøy 14 km outside the city.