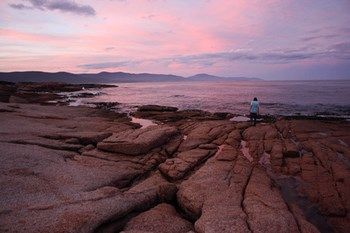 Hobart is the seat and the most populous city in the island state of Tasmania. It was founded in 1803 as a penal colony and is the oldest city in the Australia after Sydney.In 2011 the city had a population of 211,656 inhabitants. Tasmania lies 240 km southeast of the Australian continent at the mouth of the Derwent River at the foot of Mt Wellington Mountains.

The city is the economic and administrative center of the island state of Tasmania and is also a major seaport, among other ships bound for Antarctica.

Lonely Planet has put Hobart on the list of 10 recommended travel destinations in 2013. Hobart is famous Salamanca Market which will be Australia’s best outdoor market, great shopping and seafood. December is a great month to visit with many activities and markets. In late December and early January each year held Taste Festival. Another famous festival is the music festival Mona Foma also held in summer month of January.

Outside the town of Coal River Valley is the wine production. Tasmania cool climate (average temperature of 16 degrees) provides good conditions for light white wine varieties, such as riesling, sauvignon blanc, and point noir. There are good opportunities to visit wineries for tourists.