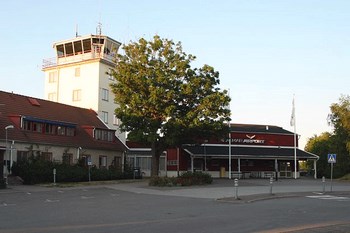 Kalmar Airport (KLR) is an airport in southeastern Sweden.The airport is 4 km   west of the city of Kalmar as the E22.Most car rental companies that offer their service at the airport are Avis, Europcar and Hertz. Bus route 402 runs to and from the airport every 20 minute.

In 2011, there were 176,877 passengers pass through the airport.From Kalmar can fly to 21 different destinations in Europe, but it’s domestic routes are the busiest. Kalmar has received a new airline named after him, namely kalmar flight that departs to Stockholm-Bromma and Tallinn.It’s Wing is responsible for most charter routes. Since 2007, the Kalmar municipality that has been responsible for the operation of the airport.

Kalmar Airport has a variety of services, including free wireless in the internet. They have a duty free shop, restaurant, conference facilities and tourist information.