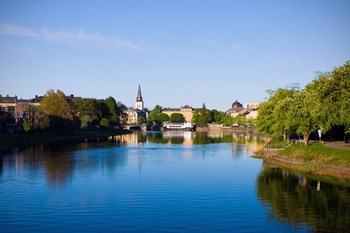 Karlstad is located in the north of Sweden’s largest lake Vänern in central Sweden, and is the administrative center of Värmland County. The city has about 62,000 inhabitants (2011), and is located where the river “Klarälven” flows into Lake Vänern.

Karlstad has one of the country’s largest lake ports, and is a university with about 11,000 students.

The city has a number of sights and tourist attractions – including Värmland Museum, which has great historical collections and exhibitions.

Other popular destinations in Karlstad include the 168 meter long stone bridge “Ostra Bron” from 1811 – which is the longest stone bridge in Sweden, Karlstad Cathedral from the 1700s, the Art Museum Sand Floor Lars Lerin – with exhibitions of watercolors and graphics, and Alster manor from 1772 – a memorial courtyard devoted poet Gustaf Fröding .

Brigade Museum in Värmland is currently scheduled to open in 2013 in Karlstad. This will be a great tourist attraction for the city, and the museum will have defenses historical exhibits.

Passengers traveling to Karlstad with children, a visit to Mariebergsskogen recommended. This is a small amusement park with such Ferris wheel, a mini-zoo and an open air museum with several historic buildings in the region.

Karlstad also has an indoor swimming pool and several swimming spots along the lake Vänern.

Slightly off Karlstad city center is Bergvik mall – which has about 65 stores.