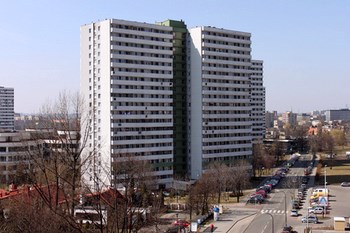 Katowice is located south in Poland, in the Silesian region – and is a city of around 320,000 inhabitants (2010).It lies in a larger urban area – where the total staying around 3.5 million people. Katowice is first and foremost an important industrial city – but is also the area’s undisputed center of culture and education.

Katowice was founded around the year 1600, but did not state until 1865. The German influence in Katowice are historically significant, but since 1921, the town belonged to Poland – even though a majority of the residents at that time had preferred to be “German”.

There are a number of significant cultural institutions in Katowice – including several theaters and museums. Much of the city’s culture is devoted to the Silesian tradition. The city’s main theater (established 1907) is the Silesian Theatre – while the largest and most famous museum is the Silesian Museum. The latter is housed in an older, stately hotel building – and houses a number of ethnological and archaeological objects – in addition to a large number Silesian artwork.

Among the other museums must especially the interesting museum of Polish scenography mentioned.

Katowice’s central church, the Cathedral of Christ, is relatively new – built in the period 1927-1955 in the classicist style. Adjacent to it is a magnificent old archbishop’s palace in a beautiful park. Parker is otherwise many of Katowice – and the largest and most popular is Wojewodzki cultural and recreational park, such as contains a zoo, a planetarium, a water park and an amusement park.

The nearest airport is Katowice Airport, located 40 km north of the city.