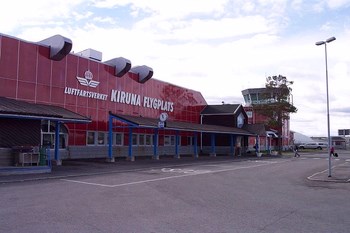 Kiruna Airport (KRN) is the northernmost regional airport in Sweden.It is located 9 km from the center of Kiruna and the bus to and from the airport. Most car rental companies are represented at the airport include Avis, Hertz and Europac.

In 2011 164,103 passengers pass through the airport. Scandinavian Airlines is a company that serves the most destinations, the most common being Luleå and Stockholm Arlanda.In connection with the winter season there are also fly to various locations in England, Copenhagen and Tokyo.

At the airport there are meeting and conference rooms with capacity for 25 people. There is also a souvenir shop, restaurant, and wireless internet.