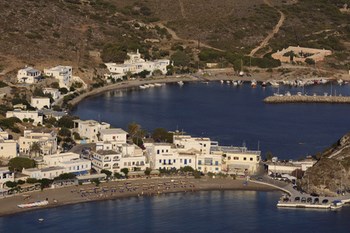 The Greek island of Kithira (Kythira, Kythera) is located south of the Peloponnese peninsula in the Ionian Sea, and has about 3500 inhabitants. In summer the population is increasing at twice, when tourists come to Runde. It is primarily the Greeks from the mainland on vacation here, but also some Europeans.

The island consists of a limestone plateau (up to 507 m) and is characterized by a hilly terrain with deep coves and steep cliffs. There are also many beautiful beaches here.

South of the island is the capital Kithira Town (Chora), which has about 500 residents. The town lies at the foot of a Venetian fortress from 1503. One can also visit the archaeological museum here and a Byzantine museum.

East of the island’s limestone caves and remains of a Minoan settlement. On Kithira it is also more beautiful Byzantine churches, medieval villages and monasteries.

Despite the fact that tourists consume island in summer, this is a quiet and peaceful island where sun, beach – and swimming is the focus.