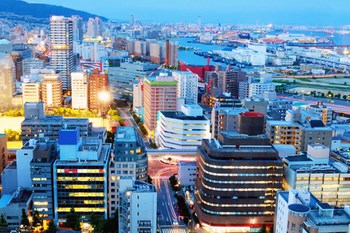 Kobe is located on the island of Honshu Osakabukta, and is the capital of the prefecture of Hyogo. Distance eastward to neighboring Osaka is approx. 30 km – and Kobe together with Osaka and several smaller towns in the area urban and industrial region Hanshin.The population of Kobe is around 1.5 million (2006).

Kobe is one of the world’s biggest ports. Large parts of the port facility and part of industrial enterprises located in the landfill in Osakabukta. The harbor area, which was heavily damaged during an earthquake in 1995, was later rebuilt. In all, nearly 6,500 of Kobes residents died in this earthquake.

The modern city of Kobe was founded in 1889 as a port for Osaka, but already at 200 century ADKr. there was a settlement in this area, and a short period at the end of the 1100s was Japan’s administrative center here.

Kobe is otherwise a utdanningsby – with several universities and other higher education institutions. There is also a Norwegian Seamen’s Church in the city.

Among the many attractions there are several large parks and a variety of museums – including a technical museum, a maritime museum and multimedia museum Hanshin Awaji Daishinsai Kinen, established in memory of the great earthquake in 1995. Also Art Museum Hyogo Kenritsu Bijutsukan is a popular tourist destination. It is housed in a unique concrete building, designed by renowned Japanese architect Tadao Ando.   The museum’s permanent exhibition contains works by the 20th century’s most famous Japanese painters.

From the northern part of the city center runs three cable cars up to the top of Rokko Mountain, where one can enjoy a spectacular view of the city. On the backside of the mountain is the traditional recreational area Arima Onsen, a small town that consists of a labyrinth of small streets and traditional houses – in addition to the hot springs which are said to have a healing effect.

The nearest airport is Kobe Airport, located on an artificial island about. 8 km south of the city.