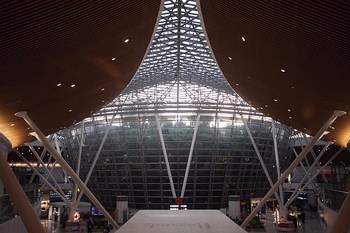 Kuala Lumpur International Airport (KUL) is Malaysia’s largest airport.It is located in Sepang, ca. 50 km southwest of the capital Kuala Lumpur, and was officially opened on 27 June 1998.As many as 35 million passengers annually serviced here and the airport is therefore also one of the largest in Southeast Asia.

There are two terminals at the airport (Main Terminal and Satellite Terminal), which are interconnected by means of an automatic train. The airport is the base for airlines Malaysia Airlines and AirAsia, but otherwise fixed route connection (via many international airlines) to a number of destinations worldwide.

There are two trains between the airport and Kuala Lumpur: A very fast, driverless metro express, and a more traditional train follows the same route, but stops at several stations. Otherwise there are many buses from the major station in the basement of the airport parking garage. If you choose to take a taxi (fixed rates to Kuala Lumpur city center), you can buy your ticket in advance in the arrival hall.

If you want to rent a car in Kuala Lumpur, has a number of car rental companies in their branches at the airport – including Avis, Budget, Hertz, National and Thrifty.

The public facilities at the Kuala Lumpur International Airport is very good. It has several restaurants and snack bars in both terminals, as well as a good selection of shops, play area for children etc.