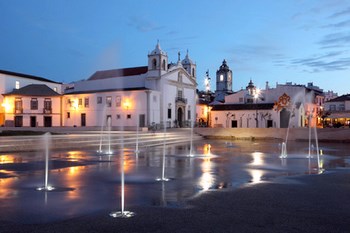 Lagos is a small town with about 18,000 inhabitants (2008), located on the southwestern part of the Portuguese Algarve coast – About 60 miles west of Albufeira.Lagos is the southernmost city in Portugal.

Lagos had an important function in the 1500s, as the departure port for Portuguese explorers. The city was heavily damaged by a major earthquake followed by a tsunami in 1755, but several buildings from the 1600s are still preserved.

Architecturally, the city’s oldest buildings characterized partly by a Moorish tradition, part of the Renaissance style.

Among the main attractions is a medieval fortress – and a number of churches. The most popular of these is São João Hermitage and Santa Maria do Misericrida (both from the Middle Ages) and the Igreja de São Sebastião from the 1600s.

Lagos is one of the most popular resort towns in Portugal, the hotel offers excellent opportunities for surfing. Algarve   considered that may be ideal just for this water sport activity.Otherwise, there are several inviting beaches in the immediate vicinity of the center of Lagos.