Compare prices and find cheap car hire on Lanzarote from well-known and local car hire companies. Insurances and unlimited mileage are included. Save up to 70% on car rental in Lanzarote through us. 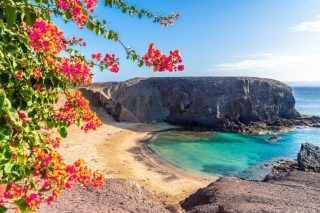 Lanzarote is both the northernmost and easternmost of the Canary Islands. The island is located in the Atlantic Ocean off Africa, but belongs to Spain. About 151,000 people live on the island, around 50,000 of which live in Arrecife. The main industry is tourism, followed by agriculture. Lanzarote, like the other Canary Islands, is a volcanic island. There is still an active volcano, Timanfaya, on the island, but it has not had eruptions since 1824.

The former local artist Cesar Manrique fought to preserve the island as it was, without tall buildings and mass development. In recent times, local authorities have decided not to build tall buildings or put up large advertising signs.

Lanzarote with its volcanic landscape offers more than just beaches.

The jamos del Agua cave landscape has a very special atmosphere. The cave is 1000 sqm with 20 meters to the ceiling, where it lets in weak sunlight. There is a café, restaurant, bars and disco and a large auditorium. Here you will find the natural lake in its own cave where the rare albino crabs are located.

In the Green Grotto – La Cueva de los Verdes you can join an hour-long guided tour of part of the world’s largest lava tunnel The Atlandtida Tunnel, of which Jamos Del Agua is also a part.

If you are interested in art, the San-Jose Fortress in Arrecife is worth a visit, it has been turned into a museum of modern art.

The green volcanic bay of El Golfo. The green color comes from the algae in the lagoon. It is not allowed to swim here, as the area is turned into a nature reserve.

In the Timanfaya National Park (named after the volcano), guests can dine at El-Diablo Restaurant. Meals are served on volcanic gases and guests can enjoy views of the volcanic landscape along with the meal.

There is a lot of fun to experience in Lanzarote, and you can reach all the sights and activities easily by car rental. The island’s unique nature also makes the rides an experience in itself. How far you have to drive depends on where on the island you live. Distances and driving time are therefore not included here, but there is never any talk that you have to spend a long time in the car on the small island. Here are some suggestions for places to consider stopping by while vacationing in the Canary Islands.

This national park is about 51 square kilometresand covers a large part of Lanzarote’s south-west end. The earth here is formed by ash from the volcanic mountains of the park, which therefore provides a unique flora and fauna. The area is described as very beautiful, and also very special. One almost gets the impression of being on another planet, and associations with the landscape of the moon are not uncommon. Here people stop by for a walk through the countryside, and usually on the trail that runs between the villages of Mancha Blanca and Yaiza. If you can’t walk, book a guided bus tour through Parque Nacional de Timanfaya, or rent a camel. There is also a separate visitor center connected to the park, and located in the aforementioned Mancha Blanca.

Parque Nacional de Timanfaya – the earth here is formed by ash from the volcanic mountains of the park. 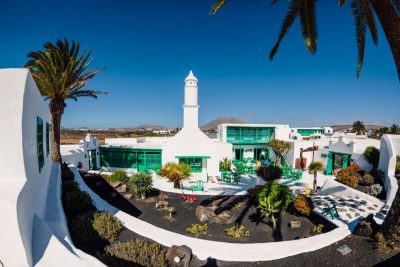 The artist César Manrique built himself a house of over 3,000 square meters and built so that the formations after the volcanic eruptions are part of the interior.

Tahiche is a small village located slightly up in the volcanic mountains north of Arrecife. The landscape around the village is very special, and formed by liquid lava from the volcanic eruptions of the 1730s. The village itself is not so exciting, but here lies one of the island’s finest buildings, home to the famous Spanish artist César Manrique. He lived for 20 years in Lanzarote, and built himself a house that is unique. It is over 3000 square meters large, and built so that the formations after the volcanic eruptions are part of the interior. Manriques house is today an open museum that can be visited every day of the week year round. 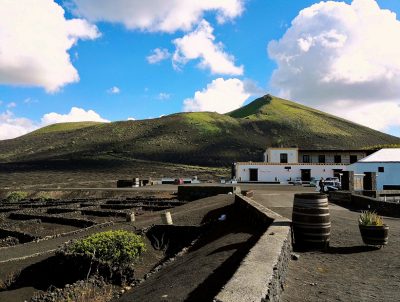 Bodega La Geria is owned and operated by a family for generations. Here there are opportunities for visits with guided tours and tastings.

Renowned white and red wines are produced, as well as sweet wines in Lanzarote. The grapevines have good conditions here, with soils full of minerals from the volcanic eruptions, and mountains protecting the wind. One of the best vineyards is La Geria. The farm is owned and operated by a family that has been working with this for generations and who love to show off their vines and products. You can visit the vineyard all weekdays throughout the year, where you will get guided tours and tastings. The farm also has its own excellent restaurant, La Cepa, where delicious cuisine is accompanied by La Geria’s own wines. There are also other good bodegas nearby that should be tried. La Geria is on the south side of Timanfaya National Park.

Water park – Great when the sea is too cold

Rancho Texas is a zoo located just on the outskirts of Puerto del Carmen, which also has a bathing facility for its guests. Here you can take a closer look at exotic animal species such as American bison, mountain lions, girths and tiger. The park also has many sea creatures, such as dolphin and sea lion, with which it is possible to go for a swim. One of the most spectacular on the ranch is the many birds of prey and the bird show that is set up daily. Eagles, hawks, falcons, condors, owls and others fly over the heads of spectators, capturing food that the asses throw to them. Rancho Texas is a great place to travel to activate both children and adults, especially when the weather is at its warmest. Then the comfortable pools and water slides come into their own.

Car rental is safe and easy in Lanzarote. Here you will hardly experience standing in line, even inside Arrecife. The roads are also in good condition, with the motorway connecting the main beaches and seaside resorts. Please note that people drive slightly differently at roundabouts in Spanish cities. If you are in the innermost lane of the roundabout, you have a duty to give way to cars in the outermost field. This makes it at times a little difficult to take off from the roundabout if you have put yourself in the wrong field. Also note that the inhabitants of Lanzarote often use left blinkers when stopping in front of pedestrian lanes.

Car rental is safe and easy in Lanzarote. You hardly experience standing in line. The roads are also in good condition, with the motorway connecting the main beaches and seaside resorts

The full name of lanzarote airport is César Manrique-Lanzarote Airport, but is often called either just Arrecife Airport, after the island’s capital located right nearby. There are direct flights from many European cities. Naturally, there are more than enough charter flights to Lanzarote as well, and then from everywhere in Europe. In total, the airport serves over 7 million passengers annually. There are two terminals here. A new terminal for all international flights, while the old terminal is used for flight routes connecting the Canary Islands.

Car hire companies have their counters gathered on the ground floor, right next to the main entrance to Terminal 1. All companies are also represented at Terminal 2, if you arrive from one of the other islands and are to have a rental car. As of today you will find 11 companies here, including Avis, Budget, Hertz and Europcar. The German company Autoreisen, and a number of local players, also have car hire at the airport in Lanzarote.

In total, the airport serves over 7 million passengers annually.