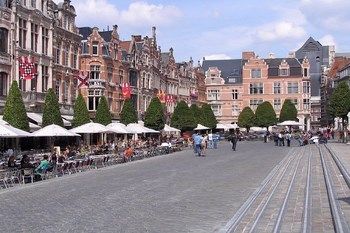 Leuven is located in Belgium, and is the capital of the province of Flemish Brabant. The city is located in the Dutch-speaking region of Flanders – by the river Dijle – and has about 95,000 inhabitants (2010).

Leuven is perhaps best known for housing the historic brewery Artois – producing beer “Stella Artois”. This is the 5th biggest brand in the world and is sold in over 80 countries.

Otherwise Leuven known for its historic town center with its beautiful architecture from the Middle Ages. Square “Grote Markt” is largely preserved as it looked in the 1300s, and the entire area is like an outdoor museum. Here you can see “Statshuis” – town hall from the 1400s in the flamboyant late Gothic style, whose facade is decorated with sculptures from the 1800s.

Other popular tourist attractions in Leuven include University from 1425 – which is Belgium’s oldest, the imposing St. Peter’s Basilica from the 1400s in the gothic style and square “Oude Markt” – a lively square with restaurants, quaint sidewalk cafes, shops and pubs.