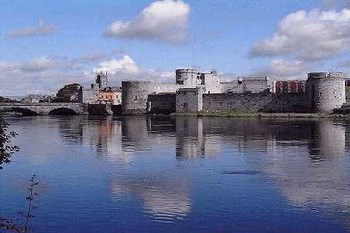 Limerick (Luimneach) is an administrative and commercial town in the southwest of Ireland – And has about 56,800 inhabitants (2011).Limerick has evolved from a modest agricultural with some textiles and lace production, from the 1990s to emerge as an important industrial and serviceby. It produces, among other things computers (Dell).

Limerick was founded in 922 as a trading colony of Danish or Norwegian Vikings on an island a little way up the Shannon River. The area had been inhabited for thousands of years, and had lived there since the Christian monks 400-500’s.

Among Limerick’s premier attractions include Hunt Museum, which is housed in a former customs house from the 1700s. It contains archaeological discoveries, artifacts, religious arts and crafts mainly from the Middle Ages. Also Limerick Museum documents the parts of the history and archeology.

In and around the city there are also a number of beautiful Gregorian houses and several beautiful parks.

A tourist attraction of a somewhat different nature, the many opportunities for interesting and relaxing boat trips on the river Shannon.

Shopping possibilities in Shannon are good – especially in the pedestrian district Cruises Street and Bedford Row.