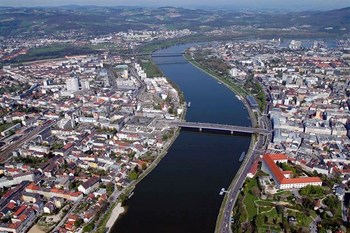 Linz is situated on the River Danube east / northeast in Austria and is the country’s 3rd largest city. Linz has 191,000 inhabitants (2012), and is the capital of the state of Upper Austria. The city is located 160 km west of Vienna.

Linz is an important commercial and industrial center. The city is also a transportation hub, and is known for its rich cultural life. Linz has a river port, and the city also hosts three universities.

Linz is known for its modern cultural institutions – including “Lentos – Museum of Modern Art.”The city was named the European Capital of Culture in 2009.

Some of the most popular tourist attractions is the “Altstadt” – old city from the Middle Ages with suchMartin’s Church – originally from the 700’s (one of the oldest churches), building “Landhaus” from 1571, City Hall from 1659, the former imperial palace from the 1600s (which is now the museum), the former Catholic cathedral from 1678 and the new cathedral from 1924, with its 135 meters high tower. This is the largest church in  Austria.

Another attraction in Linz’s “Ars Electronica Center” – a Centre for Electronic Arts, which also has interactive exhibits.