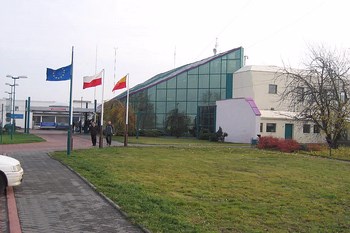 Lodz Airport – or Lodz Wladyslaw Reymont Airport (LCJ) – is a regional airport located 6 km southwest of Lodz city center. The airport was opened in 1925 and was one of Poland’s most important until the end of the 1950s. In recent years, made a major effort to revitalize the airport, especially for low-cost carriers. The airport serves about. 400,000 passengers a year.

Lodz Airport has two terminals: Terminal I, which is a domestic terminal (renovated in 1997), and Terminal II, which is international, built in 2005. A third terminal is under development.

The distance from the airport to the Lodz city is short, and you can choose between the shuttle, bus or taxi. There are several international car rental agencies represented at the airport, if you want to rent a car in Lodz. One finds such Avis, Budget, Europcar, National and Sixt their branches here.

The public facilities are modest at Lodz Airport, but there is a restaurant, café, duty free shop and a tourist office in the terminal building.

There are no hotels at the airport, but the selection is good in and around the Lodz.