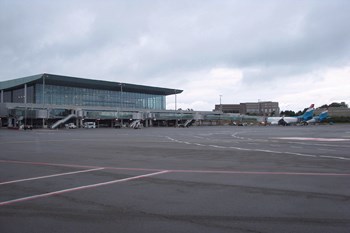 The airport was opened in the mid-1930s, and had until 2004 one terminal. When was it built a new and modern terminal building, and the old is scheduled to be demolished.

Luxair, Luxembourg’s largest airline and Cargolux have a base at the airport. Moreover, there are a number of international airlines that operate here – and from Luxembourg Airport offers regular flights to numerous destinations worldwide.

To get from the airport to Luxembourg city center, one can use either bus (several lines) or taxi. A separate station is being planned, but the date. Today there is no train service. If you want to rent a car at the airport, you can turn to that of the international car rental agencies are represented in the terminal (Avis, Budget, Europcar, Hertz and Sixt).

When it comes to public facilities, restaurant, bar and duty free shop in the terminal – as well as a private VIP lounge. The closest hotel is the Hotel Ibis Luxembourg Airport, which is located at the airport.