Compare prices and find cheap car hire in Malaga from well-known and local car hire companies. Insurances and unlimited mileage are included. Save up to 70% on car rental in Malaga through us. 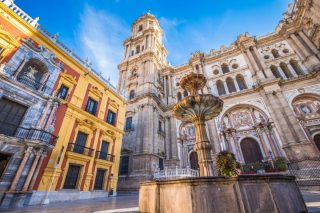 Malaga is the capital of the Costa del Sol and in the province of Malaga. The city has a population of about 600,000 and is the sixth largest city in Spain. The city has its revenues from agriculture and tourism. In this city you can combine city and beach holidays! Malaga has a lot of exciting history and sights, great shopping opportunities,great golf courses, beautiful beaches and a vibrant nightlife.

The port is Spain’s oldest and is today filled with cruise ships and luxury yatcher. The city has many beautiful parks to relax in and a beautiful botanical garden. If you are looking for shopping, stop by Calle Larios, which is the main shopping street.

The city is especially famous for its sweet wine. They also have a large selection of coffees and not least variety around the preparation. When you are in Malaga, of course, treat yourself to the city’s tapas at one of the city’s restaurants, but also local dishes such as Espeto de Sardinas – grilled sardines on a stick. Mercado Atarazanas is the central market in the city where you can buy everything from fresh vegetables to wine.

For an authentic experience, visit the old town where traditional dishes are served for the area and fine local wines. Here you will find the Catedral de la Encarnación de Malaga, which was built between 1528 and 1782. The cathedral was never completed, so the eastern tower is missing. The exterior of the cathedral is characterized by Baroque, while the interior is in renaissance style. A small museum and a park belonging to the cathedral can be found in the same place.

The world-renowned artist Pablo Picasso comes from Malaga. The museum dedicated to Picasso is located next to his childhood home in the Old Town. Nearly 300 of his works have been exhibited since he was a child.

Other attractions worth exploring are the Roman Theatre, which is Malaga’s oldest edifice. Alcazaba is a 11th-century Moorish fortthat housed Malaga’s rulers. There is also an archaeological museum nearby. Malaga’s most famous landmark is the 14th-century Castillo de Gibralfaro Castle, which rises above the city. It was originally built to protect the Alcazaba. From here you can enjoy a wonderful panoramic view, you are lucky with the weather you can see all the way over to Africa.

Malaga is the capital of the Costa del Sol and in the province of Malaga.

The Andalucia region is crammed with exciting and beautiful villages, impressive scenery, and many sights. With car rental you have the opportunity to experience much more than the hectic city life and the beaches. There are also several major cities that can be easily reached from Malaga. Here are some suggestions for the most popular rides. 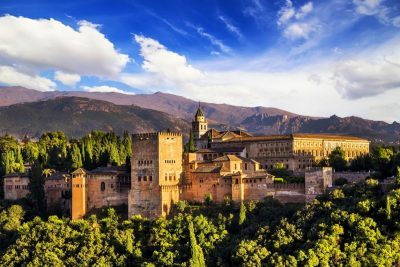 The Alhambra fortress was built in the mid-14th century and has since been expanded and rebuilt.

Granada – The City of the Red Fortress

The city of Granada is located at the foot of the Sierra Nevada mountainsand is perhaps best known for its impressive architecture that remains from when the Moors ruled the Andalucia region. Right next to the old town in the city centre is the fortress alhambra, which means such a thing as the “Red Castle”. The fortress was built in the mid-14th centuryand has been expanded and rebuilt several times since then. Much of it is originally well taken care of, including several beautiful mosaics. In Granada you will also find many other sights, beautiful streets and neighbourhoods, monuments and architecture worth more than a trip by. The city also has very good food traditions to offer, where the art of cooking from many cultures has been fused together over several hundred years. 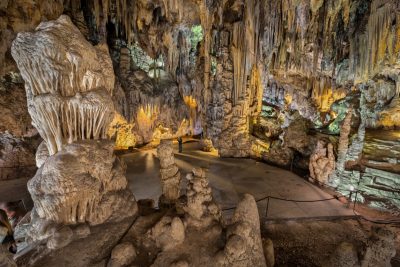 Outside Nerja you can explore caves where there are traces of Neanderthals, among others.

Nerja is an ancient fishing village that has now become one of the most popular tourist attractions on the Costa del Sol. If you are in Malaga and have a car rental, this is one of the nicest and easiest excursions you can take. The city’s main attraction is the cliff called “Balcony of Europe”. There it is great to sit and enjoy the sunset, with the sea and beaches just below the balcony. Outside Nerja you will find a complex of caves that were discovered in the 1950s. Here are traces of Neanderthals who lived in the region more than 10,000 years ago and were probably among the last survivors of our prehistoric relatives. Remains of Romans and Moors have also been found in the caves.

Ronda – The Robber Village on the Mountain Top

Ronda is considered one of Spain’s most beautiful cities, and then it is not only aimed at the magnificent medieval buildings there. The town is located on a small mountain top, with dazzling surroundings. There are ancient stone bridges over deep gorges, and many houses seem to balance on cliffs that are precipitous. One of several reasons people originally settled here is that Ronda was a hiding place for many of the region’s bandits and robbers. Here it was easy to defend yourself, which you realize when you stand in the city. Ronda is also known for being the cradle of bullfighting. The city’s sights include the Puente Nuevo Bridge,a spa and bathhouse from the time when the Moors ruled here, the original bullring, and several great churches.

Ronda is described as one of Spain’s most beautiful cities with dazzling surroundings and beautiful medieval buildings. 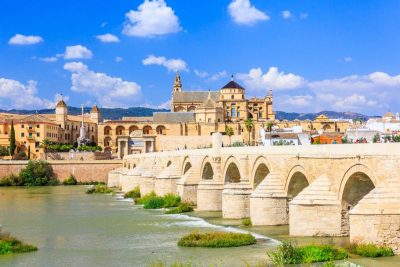 Cordoba has been a center of trade and administration for many centuries.

In almost straight direction north of Malaga lies one of the Andalucia region’s most exciting cities. Cordoba is also the third largest in the region measured in population. The city has been a center of trade and administration for many centuries. Here, among other things, Neanderthals, Romans, Moors, Visigoths and Christians have changed to rule. You can see traces of this in the city’s architecture and culture, and there are several buildings that are a UNESCO World Heritage Site here. The town is also known for its many good restaurants, where local specialties are served with pride. Several of the best and most pleasant eateries can be found in the many, small and beautiful plazas in the city centre. It is no problem to take a day trip to Cordoba from Malaga if you have a rental car, but you should consider an accommodation if you have enough time.

Other places to consider stopping by 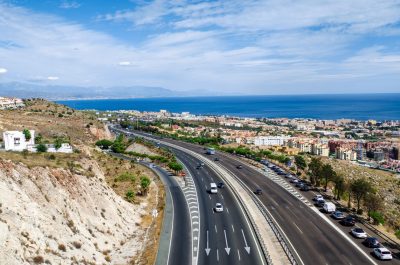 Traffic in the city can be a little dense, but rarely any problem for tourists with car rental.

In the center of Malaga it is generally difficult to find parking space in the streets. As a rule, it is better to either use the public garage facilities located on the outskirts ofthe city center , or put the rental car in a parking garage. Many hotels also have parking facilities that are open to those who are not guests.

In the center of Malaga there are many roundabouts, and you must remember that the one in the right field has the right of drive. According to the traffic rule, always use blinkers when exiting the roundabout. Traffic in the city can be a little dense, and drivers are a little more aggressive than you might be used to from home. Nevertheless, there is rarely any problem for foreigners with rental cars, neither in Andalucia nor the rest of Spain.

Most people who fly to Malaga land on Malaga-Costa del Sol Airport. It is located just a few kilometers from the city center. The airport also serves visitors going to places like Torremolinos, Fuengirola,Marbella and other cities in the Andalucia region. In total, there are approximately 19 million passengers a year flying to or from the airport in Malaga. Therefore, it is also quite large, with three terminals. From European cities, you can usually fly directly with both the major airlines and with low-cost airlines. In addition, there are charter flights from a number of locations. 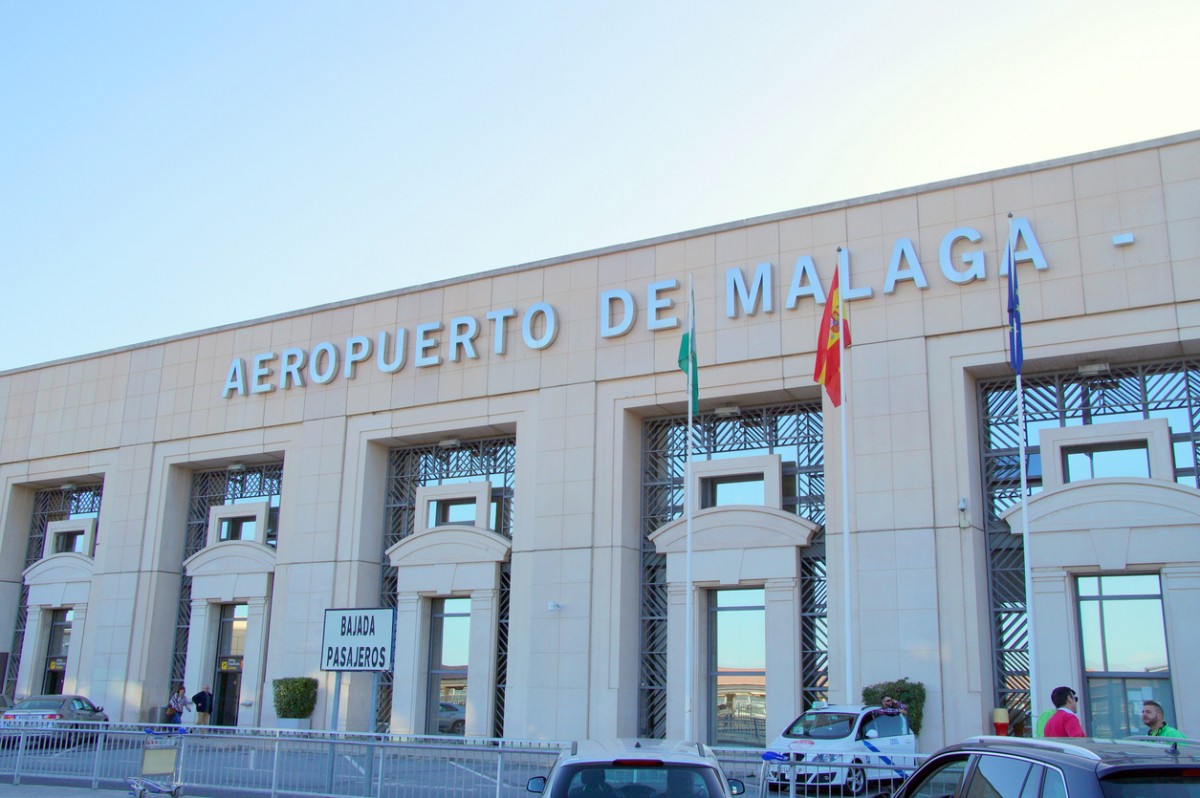 The airport is located only a few kilometers from the city center.