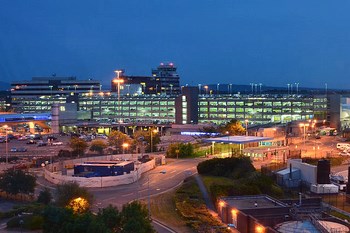 The International Airport Newcastle Airport (NCL) is located 10 km northwest of the center of Newcastle, and in 2010 Britain 11 busiest.

The airport was opened in 1935 and is one of England’s oldest. Newcastle Airport serves 4.3 million passengers annually (2010), and from here both charter and direct flights to numerous destinations at home and abroad.

Newcastle Airport has one terminal and the building are a number of amenities for travelers – including restaurants and cafes, ATMs, currency exchange counters (Travelex), prayer, business facilities, games for children, and shops (Tax-free).

There are good transport links from the airport into the city, and you can choose between metro, taxi or bus. If you want to drive yourself in Newcastle, it may be convenient to book car hire before you arrive at the airport. A number of reputable car rental companies have offices at the airport – including Avis, Hertz, Alamo, National and Europcar.

Near the airport terminal, the hotel “DoubleTree by Hilton Newcastle International Airport Hotel”.