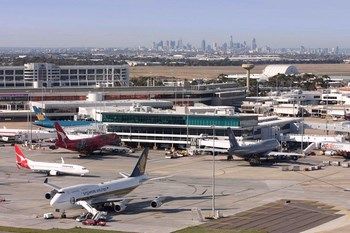 Melbourne Airport (MEL) is Australia’s second largest airport, and serviced 28 million passengers in 2010. The airport is located 23 km north of Melbourne city center – in the suburb of Tullamarine.

Melbourne Airport was opened in 1970 and currently has four terminals. There are direct flights from here to 33 destinations in Australia and a number of international destinations in Asia, Europe, Africa and USA.

The airport has received several awards and honors, including from IATA (International Air Transport Association) to provide good service to visitors.

To get from the airport into the Melbourne center, you can use the express bus (Skybus Super Shuttle), taxi or rental car. 6 car rental companies have offices at the airport – including Avis, Budget and Hertz.

Near the airport are several hotels, and only 100 meters from Terminal 2 the Park Royal Hotel.