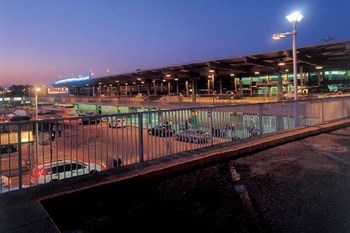 The international urban airport Milan Linate Airport (LIN) is located 10 km east of the city of Milan in northern Italy. This is the second largest airport in Milan, which serves about 8 million passengers annually (2010).The airport is named in Italian Milan-Linate Aeroporto – “Enrico Forlanini”.

Milan Linate Airport is primarily direct flights to other major Italian cities, but also some flights to European cities such as Paris, Copenhagen, Madrid, Dublin and Frankfurt.

There are a number of facilities at the airport for travelers – including shops (including duty-free), restaurants, bars, bank, post office, currency exchange desk, ATM, pharmacy, chapel and information desk.

At the airport, visitors also have access to wireless internet connection.

There are good public transport from Milan Linate Airport and to the city center, and you can choose between bus or taxi. If you continue to Milan Malpensa Airport, shuttle bus that runs between the city’s two airports.

If you want to rent a car in Milan, has a number of reputable car hire offices in the arrivals hall of the airport. You can choose between participants Avis, Budget, Easycar, Europcar, Hertz, Sixt and Thrifty. It is most convenient to book a rental car before leaving for Italy, so the car is ready and waiting when you arrive at the airport.