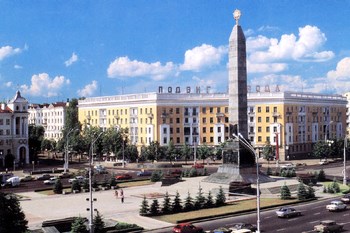 Minsk, the country’s cultural and industrial center (and gateway), was nearly obliterated during the 2 World War. The rejuvenated town is characterized by Soviet architecture of the 1950s – and the 1960s. Around the center there is an interconnected system of parks, along the river, this part of town a bucolic feel summer. Residential and industrial areas are organized in circles around the center. The industry includes automotive, tractor and food processing.

Minsk has a number of attractions to offer – including opera and theaters. There are also several interesting churches and public buildings in the city, and a good selection of museums. The foremost of these is the National Museum of History and Culture. You get a very good overview of the major events in the city and its history. National Art Museum (with artifacts from 1600 to the present day) and the War Museum also worth a visit.

The main street in Minsk called “Praspekt Skaryny” and is a lively promenade with great shopping. Otherwise, you should head to the renovated quarters east of Svislatj river, which is today, with an approximate 1600-century architecture. This is also a good selection of cozy cafes, bars, restaurants and gift shops.