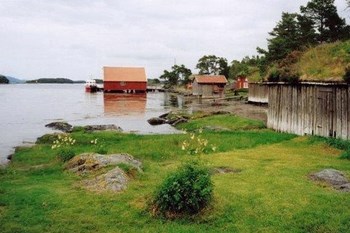 Molde is a city and a municipality in Romsdal Møre og Romsdal county, with 25 849 (2012) inhabitants.The city lies along the north side of Fannefjord and Molde Fjord, and the center is just west of Molde River’s outlet.

The city is the main industrial city in Møre og Romsdal. It has also a significant food and engineering industry. Molde is known for its football team, Molde FK.

Molde was recognized as a tourist destination in the 1800s, and it was when it was nicknamed “the city of roses” because of its magnificent parks and rose gardens. One of the more famous visitors were German Emperor Wilhelm 2 who vacationed in the Norwegian fjords every year from the late 1800s until the First World War. The trips were always completed with a stay in Molde.

Molde is known viewpoint cairn, situated 400 meters above sea level and can be climbed on foot on a trail that runs from the city center. Other attractions include Town Hall and statue Rose Maiden, cathedral, Aker Stadium and Romsdal Museum. Molde is also a good base to visit popular places Trollstigen and the Troll Wall. The wild and beautiful eight-kilometer long Atlantic Road snoer between islands out at sea is not far from Molde. From the city has views of the Molde Panorama with its 222 peaks. Hurtigruten port of Molde.

Every year in July held the Molde Jazz Festival. It is one of the most important jazz festivals, and has been visited by legends such as Miles Davis and Bill Evans.