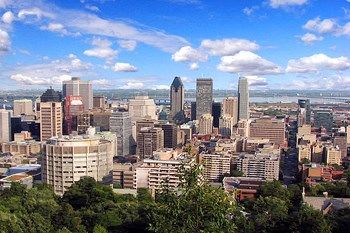 Montreal is located in southeast Canada, and is the largest city in the province of Québec. Montreal has 1.7 million inhabitants (2011), while the population of the metropolitan area is 3.7 million. Montreal is on an island (“Ile de Montreal”) where the rivers Ottawa and St. Lawrence meet. The island is connected to the mainland by a series of bridges.

Montreal is the province’s financial, commercial and industrial center and an important port. The official languages are French and English, where French is predominant.

Montreal has a rich cultural life, and numerous tourist attractions. The city has great museums, art galleries and parks. In “Downtown” is cityscape dominated by modern skyscrapers, shops and shopping centers as well as a number nightlife venues.

Other major attractions include Montreal the well-preserved historic center – Vieux Montréal – with its old buildings, narrow streets and charming atmosphere, the Latin Quarter St. Denis – where the annual jazz and film festivals held, the church of Saint-Joseph in 1967, Notre-Dame church in Gothic style from 1824 and “Kateri Tekawita Museum” – a museum of Native American culture and history.