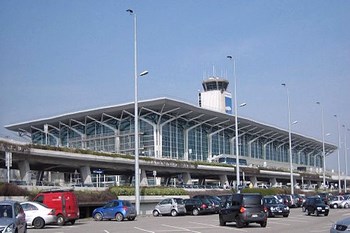 Basel-Mulhouse-Freiburg Airport (BSL, MLH, EAP) is an international airport serving the cities of Basel ( Switzerland ), Mulhouse ( France ) and Freiburg (Germany).It is located in France in the municipality of Saint-Louis right on the border with Switzerland and Germany. A total of 4.5 million passengers pass through the airport annually.

The airport is located 32 miles southeast of Mulhouse city center.

The special feature of this airport, is that it “belongs” to cities in three countries (a result of the so-called Schengen agreement). In practice it is particularly adapted for passengers going either to Mulhouse or Basel, in that there are separate outputs with separate French and Swiss passport control. Highway to Basel is “Swiss” also on the French side of the border (ie no French passport control and no exits until one is on the Swiss side. If one is to Freiburg, one must either choose to go via France or via Basel in Switzerland.

There are three departure halls otherwise, and should inform in advance about which one to choose – depending on the destination.

Traffic connections both to Mulhouse, Basel and Freiburg are good – and you can choose between buses and trains to all three cities. In addition, one can of course use taxi which is affordable price ratio is made whether to Mulhouse or Basel, but expensive if you going to Freiburg.

Several international car rental companies have offices at the airport (Avis, Budget, Europcar, Hertz, National and Sixt), but you must choose to hire a car in French or Swiss sector of the airport.

In the terminal buildings, there is a gourmet restaurant and a variety of bars and small cafes. There are also several kiosks and shops (including duty) where – in addition to that the airport offers excellent conference. There are no hotels at the airport area.