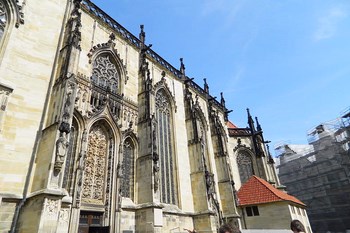 Münster is a city in North Rhine-Westphalia in northwest Germany.The city has a population of 291,754 (2011) inhabitants.

Munster claims to be the bicycle capital of Germany. There are bicycle lanes and paths linking all districts with each other and the center, and there are special traffic lights for bikes. Bicycle stations in Münster offers bicycle rentals.

Biggest part of the picturesque old town was destroyed during the 2nd World War. Most of the buildings were rebuilt in the old style in the first decade after the war, including the gothic cathedral St. Pauli from 1264 with their two beautiful towers. The cathedral is famous for its astronomical clock that shows the moon phases and planetary positions with chimes from the 1500s.

Other historic buildings that are worth checking out are Münster castle from the end of the 1700s, which was built as the residence of the prince bishop. Now hold university here. St. Lamberti is a beautiful church from 1375. The center is concentrated around Prinzipalmarkt is a market place with City Hall from the 1300s. It was in this hall Peace of Westphalia was signed in 1648.

The city has several museums, one of them is the Pablo Picasso Museum of Graphic Art.

Münster Osnabrück International Airport is 27 km from the center of Munster.