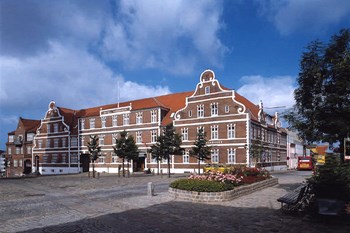 Næstved located in the south of the island of Zealand in Denmark, and belongs to Region Zealand.The town has 41,700 inhabitants (2011), and by the river Suså – which culminates in Karrebæk Fjord.

Næstved was founded in 1135 and is today a major commercial and industrial town and an important railway junction between Nykøbing Falster and Copenhagen.

The city’s shopping streets with shops and cafes surround Axeltorv, and in the northern part of Næstved’s Mall “Næstved StorCenter” – with about 65 stores.

NAESTVED most visited tourist attractions include St. Morten’s church from the 1200s, Sankt Peder’s Church from the 1300s, “Helling Ghost house” which houses Næstved Museum – with its local history exhibits, Herlufsholm boarding school from 1565 – former convent and zoo Næstved Zoo – which opened in 2007.

Approximately 6 km south of the city lies Gavnø Castle, which is a major tourist attraction. The main building was constructed in 1408, but later rebuilt to current rococo style. It is beautifully situated at Karrebæk Fjord and has a lovely castle park with such rose garden, sculptures and monuments and butterfly.

Amusement Bonbon-Land located 7 km north of Næstved, and is an attraction for the whole family.