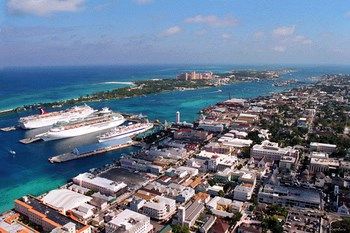 Nassau is the capital and largest city of the Bahamas Commonwealth. The city is located on the island of New Providence and has a population of 248,948 (2010) inhabitants, i.e. 70 percent of the entire population of Bahamas.

When the British abolished the international slave trade in 1807, thousands of liberated Africans freed from slave ships by New Providence. Historically, Nassau considered to be a stronghold for pirates, and today part of this dramatic and exciting story experienced at the Pirate Museum.

Nassau an attractive port city where one can find a colourful mix of the old world with colonial architecture, and a busy modern harbour. It has a picturesque old town which is very suitable for walking. The pleasant tropical monsoon climate and the Bahamas islands’ natural beauty has made Nassau a popular tourist destination. It is only 290 miles from Miami, and in particular it is a popular vacation spot for Americans.

Cable Beach is the city’s most famous hotel district known for its large hotel complex, restaurants and golden sandy beach. This is also the Crystal Palace Casino. The most obvious attraction is Atlantis Located on Paradise Island just outside of Nassau. Atlantis is nothing less than one of the most luxurious, most expensive and largest establishments, and a dream world for those who have the wallet for it.