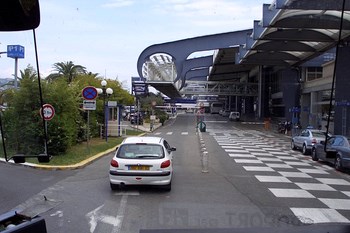 Nice Côte d’Azur Airport (NCE) – which in French is called Aéroport Nice Côte d’Azur – is about. 6 km southwest of Nice center, and is the main airport for the majority of tourists who travel to the French Riviera (Côte d’Azur).In addition, it serves as the national airport for the tiny principality Monaco.There are also real helicopter connection between Nice Airport and Monaco.

Each year, the airport serves nearly 10 million passengers, making it France’s 3rd busiest. There are direct flights to numerous destinations in Europe – and some in America – from the Nice Côte d’Azur Airport.

If you want to rent a car in Nice, several of the major international rental agencies represented here – including Avis, Europcar, Hertz, National and Sixt.

The terminal building is both restaurants and bars – as well as several shops. The airport can also offer excellent conference. There are no hotels at the airport, but you can take the shuttle bus directly to several of the major hotels in and around Nice.