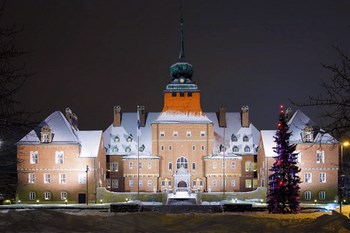 Östersund is located in central Sweden – By the lake “Storsjön” in Jämtland.The city has about 44,000 inhabitants (2010), and is an important commercial center for the Jämtland.

Östersund is situated opposite the island “Frösön” in Storsjön, and it is a bridge between the island and the city.

Östersund is a famous winter resort, and the Biathlon World Championships were held here in 2008.

A famous landmark of Östersund’s city hall with clock tower from 1912, which is 51 meters high.

Also the 65 meter high water tank “Arctura” has become a landmark in the city – for its 7000 small lamps that provide an evocative play of light in the evening. Arctura is often called the “thermos” by locals. On top of the building is both a restaurant and a bar – where visitors have great views over the city and region.

Other tourist attractions in Östersund is Storkyrkan – a basilica from 1940, Jämtland Museum – with exhibitions of art and culture and open air museum, Frösö Church from the 1200s (on the island Frösön and Frösö Zoo – and the amusement park, which is also located on Frösön.

It is also great shopping in Östersund with over 300 stores.

The airport is Åre – Östersund Airport is located 11 miles west of downtown.