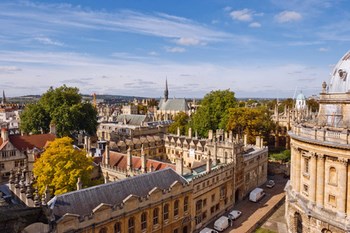 Oxford is located on the rivers Thames and Cherwell in South England – ca. 90 km northwest of London.The city has about 155,000 inhabitants (2008), and is part of the English county of Oxfordshire.

Oxford is most famous for its university, “University of Oxford” – which was founded in the 1200s – and is Britain’s oldest. The University has a number of college buildings scattered around the city, cityscape dominated so many of the beautiful old buildings and churches with spiers and towers. Oxford called for that reason often “City of Dreaming Spires”.

Many of the city’s tourist attractions belong to the university, and some of the most visited sights include tower “Oxford” from 1071, “Carfax Tower” from the 1200s, the church “University Church and St. Mary the Virgin” from the 1200s, the Natural History Museum “Oxford University Museum of Natural History”, and the art gallery “Modern Art Oxford “.

Otherwise, the city has good shopping and a vibrant nightlife. Oxford is also known to be a “green” city, with many parks and recreation areas.