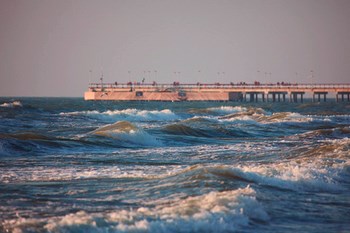 The coastal town of Palanga is west of Lithuania – a little north of Klaipeda – and has about 20,000 inhabitants (2011).Palanga is one of Lithuania’s most visited tourist destination, particularly for those seeking sun, sea and beach holiday. Palanga consists of five previous smaller fishing villages that have been merged into a city. There are many hotels and several campsites in and around the city.

Business is based primarily on tourism. In addition, a relatively large oil terminal Butingė. Palanga Lithuania is often called “summer capital”. The buildings are concentrated along a two-kilometer long main street that runs inland from a pier jutting out into the Baltic Sea. The beach –   which is 25 kilometers long – is regarded by many as the best Lithuanian.Part of the beach is marked with the “Blue Flag”, which indicates clean water and safe waters.

The most attractive part of the beach is located near the Botanical Gardens, which often hosts concerts and beach parties for young people – especially in the summer.

For other places in Palanga, the city’s amber museum mentioned. This is a popular tourist destination and situated in the beautiful Renaissance castle “Tyszkiewicz” from 1897. Also the Catholic Church of St. Mary in 1906 – with its 76 meter high tower –   is one of the city sights.Moreover, the Lithuanian oldest pharmacy in the center of town Palanga, which was established in the middle of the 1850s.