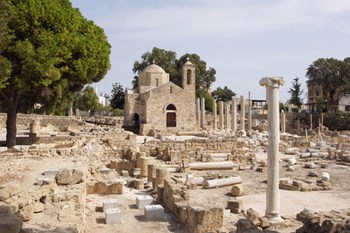 The coastal town of Paphos (Pafos) is located southwest of the island of Cyprus in the Mediterranean, and has about 51,000 inhabitants.The town is a popular tourist resort with hotels and apartments as well as inviting beaches, limestone cliffs and azure sea. Paphos has a small and picturesque harbor, where many nice restaurants and cafés.

According to legend, Paphos is known for being the birthplace of the Greek goddess of love Aphrodite.

The oldest part of Paphos was founded at the end of the year 400 BC Kr., And is today a UNESCO World Heritage Site. Why not try see the famous ruins of “Old Paphos” with the Roman Governor’s Palace from the 3rd century..

Also the archaeological burial site “Tombs” from the year 400 BC Kr. is a major tourist attraction.

A famous landmark for Paphos medieval castle “Phapos Fort” from 1586. This is located on the harbor, and has previously been used as a prison. Today the castle is used as a venue for the annual and popular culture.

The archaeological museum built in Paphos, a visit. Features include exhibits of gold jewelry and Roman glass from the 15th century BC Kr. the 3 century AD Kr.

The city has otherwise tourist attractions such as the zoo and water park.