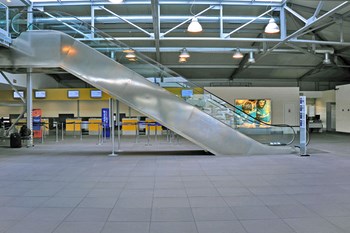 The international airport is Parma Airport (PMF) is located in northern Italy, specifically in the region of Emilia-Romagna.The airport is called in Italian “Aeroporto di Parma”, and is also often called the “Parma – Giuseppe Verdi Airport”.

Parma Airport is located 3 km northwest of the center of the city of Parma, serving approximately 270,000 passengers annually (2011).

The airlines Ryanair, Air Vallée, Belle Ari and Windjet have permanent and seasonal routes from Parma Airport to both home and abroad – including to destinations such as Brussels, Paris, Tirana, London and Rome.

The airport was opened in 1991 and has a terminal building. There are relatively few facilities at the airport for travelers, but there are 2 coffee shops / café and ATM.

If you need accommodation near the airport, the nearest hotel – “Ora City Parma” 1.4 miles from the airport terminal.

To come in from Parma Airport to the city center you can take a taxi or bus.

However, it is popular to rent a car in Parma, and the airport has several car rental companies in their affiliates – including Hertz, Sixt and Europcar.

The car has the freedom to explore the region at their own pace and take pleasant trips. If you book car hire before departure, the car will be ready when you arrive at Parma Airport.