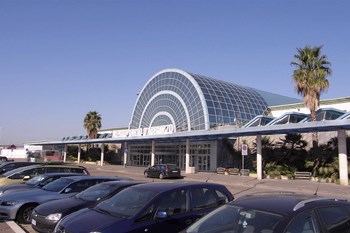 Abruzzo International Airport (PSR) – which is the official name of Pescara Airport – located 5.5 km southwest of the center of the coastal town of Pescara, on the Adriatic Sea in Central Italy.

The airport is called in Italian “Aeroporto Internationale d’Abruzzo”.

Pescara Airport is a relatively small international airport, which opened to civilian traffic in 1996. It is served mainly by low cost airlines such as Ryanair and Alitalia, which has direct flights to several European cities – includingBarcelona, Bergamo, Brussels, Frankfurt, London, Paris, Milan and Tirana.

Pescara Airport has relatively few facilities for travelers, but you will find a small selection of shops, restaurants and bars in the terminal building. In addition, tourist office, information counter, conference and meeting rooms, bank and ATM.

There are good public transport from the airport into the center of Pescara, and you can choose between bus or taxi. In addition, a number of international car rental companies its branches at the airport, if you want to rent a car in Pescara. The best known include Avis, Hertz, Europcar and Sixt.

If you want accommodation close to the airport, there are several hotels in the immediate area.