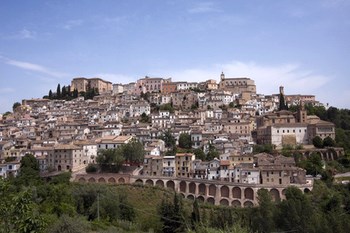 The port city of Pescara on the east coast of central Italy – Where Aterno-Pescara river flows into the Adriatic Sea.The city is part of the Abruzzo region, and is approx. 200 km northeast of Rome.

Pescara has approximately 123,000 inhabitants (2011). The landscape in and around the city is relatively flat, and on both sides of the city by the coast’s beautiful beaches. This makes Pescara is a popular seaside resort in summer. There is also ferry service from the port of Pescara to a number of other cities around the Adriatic.

The old town of Pescara has a number of attractions, including St. Cetteus Cathedral from 1938 – where you can see the painting “Saint Francis of Assisi” from the 1600s.

Other popular attractions include Pescara The regional museum “Museo delle Genti d’Abruzzo” – with exhibits that tell the story of the Abruzzo region, “Gabriele D’Annunzio” museum – a museum devoted to the poet D’Annunzio life and work as well as the Modern Art Museum “Victory Column “.

The city also has a sjømuseum, which is worth a visit. It is also great shopping in the heart of Pescara, in the city’s main shopping street “Corso Umberto”, is a lot of fashion shops.