Compare prices and find cheap car hire in Pisa from well-known and local car hire companies. Insurances and unlimited mileage are included. Save up to 70% on car rental in Pisa through us.

Pisa is located in the Tuscany region of northern Italyand has about 90,000 inhabitants (2010). The town is more specifically located on the River Arno – 10 km from the outlet of the Ligurian Sea.

Pisa is an important traffic hub for northern Italy, and is also an important trading and maritime city. Many tourists visit Pisa, and the city’s university (founded in 1343) has about 60,000 students.

Pisa is world famous for its leaning tower – the “Torre pendente di Pisa” – which was built between 1175 and 1350. The tower is 55 meters high on one side and 56 meters high on the other. It is an opportunity for the public to come up in the tower.

The Leaning Tower of Pisa stands on the “Piazza del Duomo” (cathedral square) or “Piazza del Miracoli” – the city’s main cultural, religious and touristy center. The site is a UNESCO World Heritage Site. Here you can also see pisa cathedral “Duomo di Pisa” from the 12th century– the round Baptistry in white marble from the 1150s as well as the Cemetery – which was built in 1278. 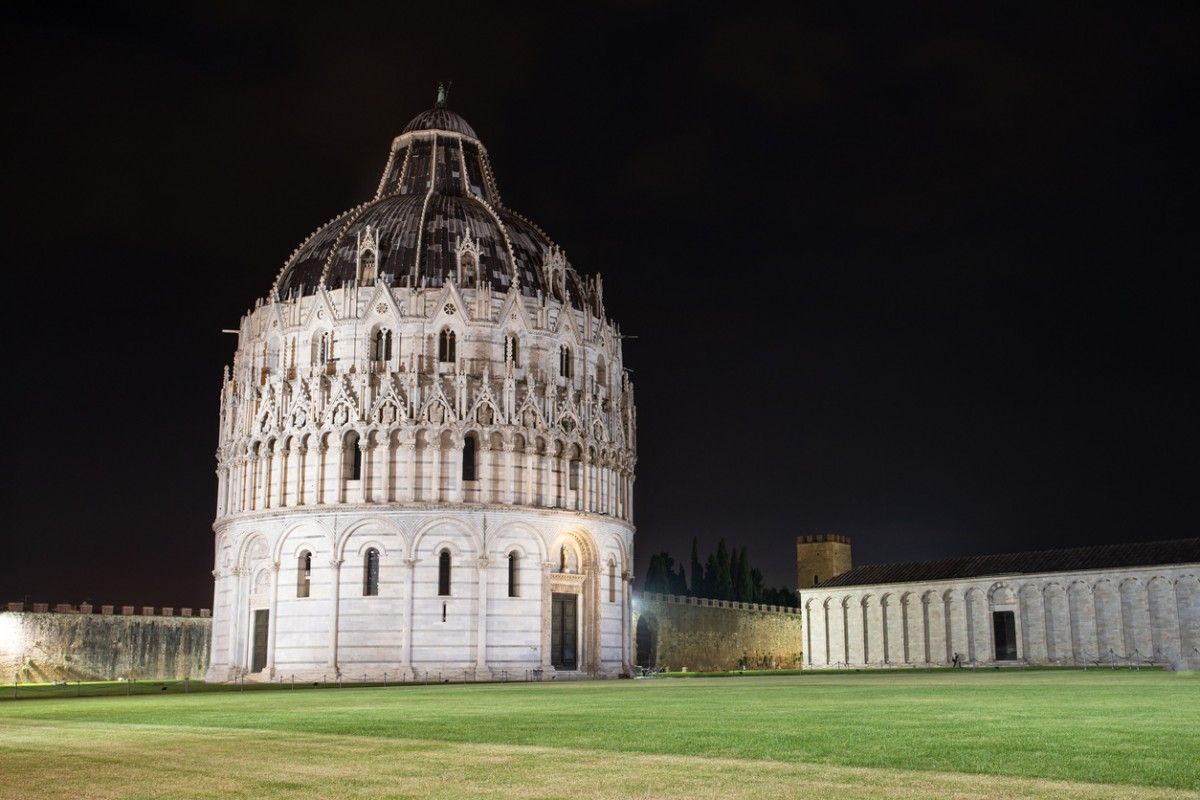 The baptistry symbolizes one of the three phases of human life – the birth.

The city also has several interesting museums – including the “Museo del Opera del Duomo” – a cathedral museum with exhibitions of sculptures and paintings.

Art enthusiasts should also head to the “Museo di San Matteo” – an art and history museum located in the monastery “San Matteo”.

There is much to experience in Pisa, and even more if you take some excursions in the same region. With a rental car, you can easily reach beautiful and relatively unknown villages by the sea and up in the mountains, and to more famous cities such as Siena and Florence. The region is also a mecca for those who like good food and drink. Here are some suggestions for driving with Pisa as the starting point.

Lucca is a beautiful city with a welcoming and friendly atmosphere. It is not too far from Pisa, and is easily reached if you have a rental car. The centre of Lucca is surrounded by a medieval city wall that is completely intact. Within the walls you will find lovely old houses, cobbled streets,great church buildings,and lots of nice restaurants and cafes. This district is known for producing excellent wines and vegetables, especially olives. If you’re looking for olive oil that you want to take home, Lucca is definitely a place to focus. The center of Lucca is also decorated with olive trees, as if to emphasize the point.

Piazza in Lucca with nice restaurants and cafes. 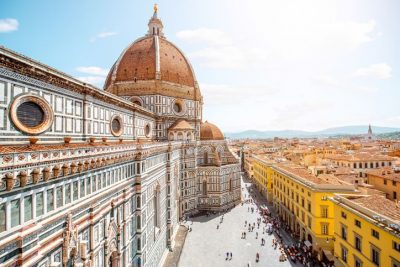 Cathedral of Santa Maria del Fiore in the Old Town of Florence.

Florence in The Pearl of Tuscany

You can’t visit Pisa and Tuscany without taking a drive by Florence. The city is considered the cradle of the Renaissance, and is among the most beautiful in Italy. Getting all the sights is almost impossible on a trip, and many choose to take at least one overnight stay when they visit Florence. Highlights include the Duomo, the city’s largest cathedral, the Uffizi Gallery where the creations of famous artists such as Leonardo da Vinci and Michelangelo are on display, the Boboli Garden, the old ponte vecchio bridge,the square Piazza della Signoria, and Villa Medici, the estate that was home to the Medici family, and also later Italian kings. 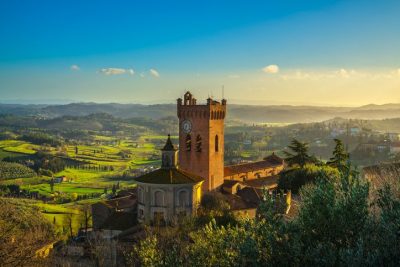 San Miniato is a small and historic town located about halfway between Pisa and Florence. Here it is great to have a small stop if you are driving from Pisa in that direction. The center of San Miniato is located within a preserved fortress wall that was first built in the 12th century, and later expanded and improved. The city was located at the time in the middle of the traffic artery that passed between the Capital of the Roman Empire and northern Europe. The location thus meant that the area was often visited by enemy commanders, on their way to some war or looting. Today it is peace and deception that reigns in San Miniato. In the old town you can see several great squares,the cathedral La cattedrale di Santa Maria Assunta e di San Genesio and several other church buildings, the city’s 14th-century town hall,and much more.

Monte Cimone – Ski destination that is just as great in summer

Monte Cimone is the highest mountain in the area of the Alps called the Apennines, with a height of 2165 meters above sea level. Around the mountain there are several beautiful villages, and here many travel to enjoy nature. In winter, Monte Cimone is a popular ski destination,with good trails and well-run ski lifts. In summer, people go hiking to the top to enjoy views of the beautiful countryside. The most special thing about the mountain is that the Italian armed forces had military installations inside the rock on the mountain top, and the area was closed off to civilians during the Cold War. If you want to experience the beautiful scenery, the village of Sestola is a good starting point. There you will find good dining options and a pleasant atmosphere, and the city is a hub for the chairlifts and cable cars that go up to the top of Monte Cimone.

Monte Cimone is the highest mountain in the area of the Alps called the Apennines. 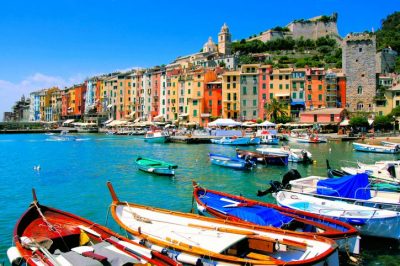 The port of the fishing village of Porto Venere.

Porto Venere – The Little Brother of the Cinque Terre

Porto Venere is often compared to the more famous Cinque Terre region, and is close by as well. Both areas are a UNESCO World Heritage Site, and both include several villages. For Porto Venere’s part, this applies to Fezzano, La Grazie, and the fishing village called the same as the district. Here you will find picturesque settlements in a lovely landscape, right by the sea,and a more relaxed atmosphere than in the Cinque Terre. Porto Venere simply offers much of the same, but with fewer tourists. Writers, poets, artists and artists of various kinds have had this area as a favorite for many decades, and you’ll see why if you stop by.

The area within the medieval wall that surrounds the center of Pisa is a so-called ZTL zone (Zona Traffico Limitato). That is, you cannot drive here unless you have obtained permission in advance. Parking in the streets must therefore be carried out outside the city walls. Most of the sights, including the famous leaning tower, have their own parking spaces that can be used for a fee. There are also several free parking spaces on the outside of the city walls,as well as parking facilities.

Driving outside the ZTL zone in Pisa is easy and straightforward. There may be some traffic jams during rush hour, but compared to many other Italian cities there is little to delay on traffic in this city. Pisa is also not a particularly large city, and it is easy to get in and out of the city centre when you are going to the other exciting places in Tuscany.

The area within the medieval wall that surrounds the centre of Pisa is a so-called ZTL zone, which means you can’t drive here. Parking in the streets must therefore be carried out outside the city walls. 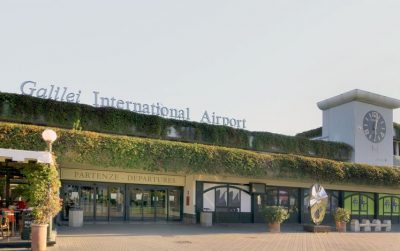 The airport of Pisa is the main airport in the region of Tuscany.

The airport in Pisa is called in Italian Aeroporto Internazionale di Pisa, Pisa International Airport in English, but is also called Galileo Galilei Airport locally. This is the main airport in the region of Tuscany. In total, approximately 5.5 million passengers a yearare served. Although this part of Italy has many popular destinations, not many of the major companies have direct flights to Pisa. However, many of the low-cost airlines fly here, and especially Ryanair.

Car rental companies are gathered at a separate centre at the P5 car park, just 550 yards from the terminal building. You can get there by taking the shuttle bus that stops right outside the main entrance to the arrivals hall, or you can walk. As of today you will find international players such as Hertz, Sixt, Avis, Budget, Goldcar and Europcar here, as well as about 10 Italian and smaller car rental companies.