Compare prices and find cheap car hire in Florence from well-known and local car hire companies. Insurances and unlimited mileage are included. Save up to 70% on car rental in Florence through us. 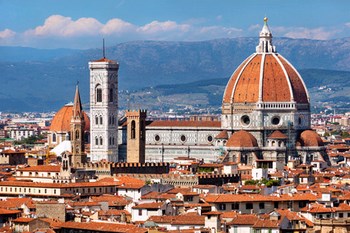 Florence is located in northern Italyand is the capital of both the region and the province of Tuscany. The town has about 400,000 inhabitants (2009), and is located on both sides of the Arno River, at the foot of the Appenniene mountain range.

Florence is one of the world’s foremost cultural cities and tourist sites, and is also an important trading and financial centre for the region. The city – a UNESCO World Heritage Site – is famous for its magnificent art collections, its historic memorials and its beautiful late Medieval architecture.

A number of bridges across the Arno River bind the districts together, and the most famous is the “Ponte Vecchio” from 1345 – where you will find the many jeweler’s stalls.

One of the main sights of Florence is the famous cathedral “Santa Maria del Fiore” from the late 13th century. The dome of the Cathedral (which is about 100 metres high) is from 1461. Outside the cathedral stands a copy of Michelangelo’s statue “David”, which is also worth catching up with.

Other popular tourist attractions in the city include: The 1180s marble bell tower, the beautiful octagonal Baptisterium (baptist church) with its 3 famous bronze doors, the Fortress of Forte di Belvedere, the city wall from the late 13th century and the Uffizi Gallery – one of the world’s most famous art museums. Here visitors can see the exhibition of works made by, among other things, Giotto, Rafael, Leonardo da Vinci and Michelangelo.

The area around Florence is also known for its beautiful scenery, and many tourists find their way up to the hills, where you have great views of the city.

Although Florence is worth a long visit in itself, you should take the opportunity to also see other parts of the region. Below you’ll find a small number of suggestions. Keep in mind that many cities in Italy are completely or partially closed to private vehicles. For example, you need to park your rental car outside Siena’s Old Town if you want to visit. This is usually not a problem, and you will find parking garages and parking spaces everywhere. 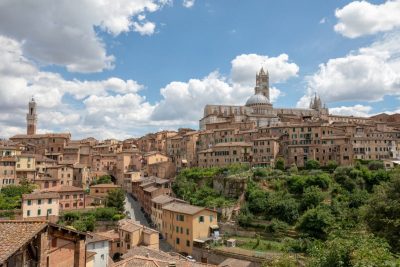 The entire center of Siena is a UNESCO World Heritage Site.

There are many beautiful cities in Italy, but Siena is still something special. The entire city centre is a UNESCO World Heritage Site, which is not hard to understand when you see the city for the first time. Here there is fabulous architecture everywhere, magnificent piazzas,cobbled streets, and a sea of monuments and other sights. The city is also known for its excellent food traditions, many museums, art galleries and pleasant atmosphere. Siena is a city you should set aside some time for, preferably more than a day. Both because there is a lot to experience in the city, and because there are many visitors there, which allows there to be queues at the sights. 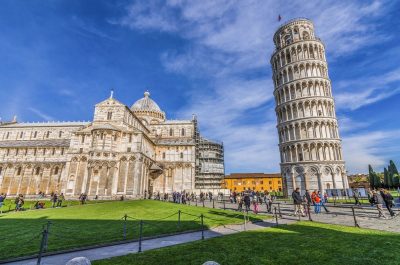 The Leaning Tower of Pisa.

Pisa – More than a crooked tower

Most people know the Leaning Tower of Pisa, but the city has much more than the tower to offer. The center is divided by the River Arno which flows into the sea about 9 kilometers to the west. The location made Pisa a powerful and important city already in Roman times. The old town is dominated by medieval architecture. In a comparison with, for example, Siena, most people will find pisa more monumental, and the sights bear the impression that the city was rich and powerful. Besides the Leaning Tower, Piazza dei Miracoli, many churches and cathedrals, and several palaces are among the main sights.

Castiglione del Lago is located about the middle of lake Trasimeno Lake, southeast of Florence. Originally, the town was located on a small island, but as time has passed, and the city has grown, it has grown into the mainland. Now the center looks more like a promontory. The old town’s settlement is surrounded by a medieval fortress wall,with beautiful small houses at one end, and the fort at the end that is right at the seaside. The small town is known not only for its ancient history and magnificent buildings, but also for its local specialties in the food road. You can experience them at one of the city’s many good restaurants. 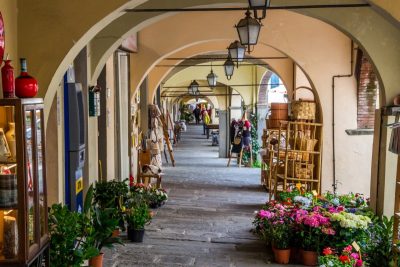 Greve in Chanti is a medieval town in the Chanti wine region.

Greve in Chianti – Beautiful medieval town in the wine district

Chianti is one of the best wine regions in Italy, and also an area that can be described as very beautiful. Here people travel to taste wine at the vineyards, eat delicious food, and to enjoy the countryside. Many famous artists over the years spent long periods in Chianti, and the inspiration was drawn not only from nature, but also from the many and beautiful small towns of the area. The region is quite large, and includes, among other things, the cities of Pisa, Florence, Siena and Livorno. The essence of the region, however, gives you the best impression of in medieval villages,such as Greve in Chianti. This is considered the most important city in terms of the region’s winemaking, and is surrounded by many of the most famous vineyards.

Montalcino is an ancient village with medieval settlements. It is located at 564 meters above sea level on a hill in the Valley of Val d’Orcia, some distance south of Siena. At the top there is a fortress that was built in 1361, with the village’s other settlement located just below. Here you will experience an authentic Italian mountain village that has an exciting history, with superb views of the beautiful valley. This area is also considered among the best wine districts in Italy. One of the country’s most famous wines, Brunello di Montalcino comes from here. 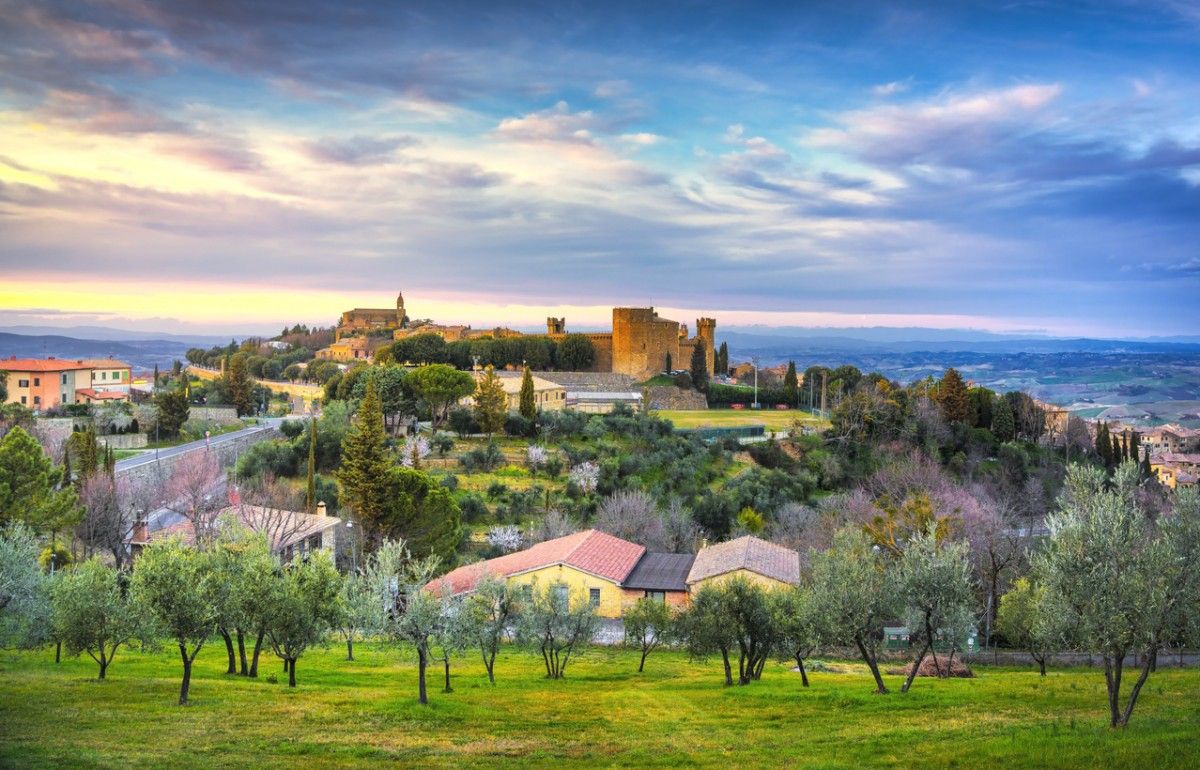 The mountain village of Montalcino, here you can see the fortress at the top of the hill and the village below. 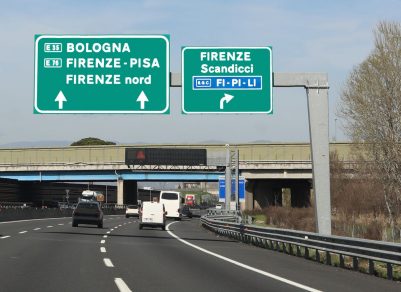 In the very center of Florence you should leave the car and instead use your legs or public transport.

Most of the center of Florence is within a so-called ZTL zone (zona a traffico limitato). This means that most people are allowed to drive here, except for those who are going to or from their hotel. If this applies to you, please contact the hotel in advance and ask them to assist you with permission. Please note that the permit will usually apply only to drop-off with your luggage, and the car must usually be parked outside the zone anyway, if the hotel does not have its own parking.

Some zones are such that you can drive there within certain times. You should still consider avoiding and driving, as the city is crowded and cramped. You also risk straying into a zone where you are not allowed to drive anyway. The best thing is to use your legs and public transport. You can put on one of the many parking garages located outside the ZTL zone.

The airport in Florence is called Aeroporto di Firenze-Peretola, or Amerigo Vespucci Airport. It serves Florence, and the entire Tuscany region along with the airport of Pisa (Aeroporto Internazionale di Pisa). There are about 5.3 million passengers annually. If you land in Florence you may have flown via a European city, as there are not as many direct flights here as to, for example, Milan. Much of the traffic to Florence goes via the airports of Copenhagen, Frankfurt, Brussels, Rome, Munich and Zurich.

Car rental companies are gathered in a separate car park next to the terminal building (Palagio degli Spini). There you can get on the shuttle bus that runs every 20 minutes. As of today you will find Avis, Budget, Europcar, National, Hertz, Thrifty and Sixt there, as well as a number of Italian car hire companies. Please note that several of the companies share counters.